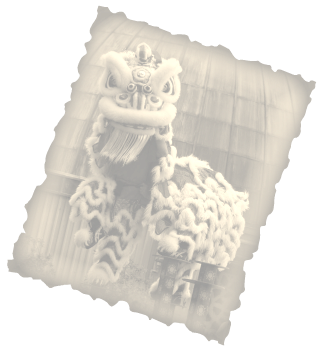 The Nian and the Lucky Lion

The lion dance's ancient rituals are said to bring good luck. Legend has it that during the Sung Dynasty, the villages of Foshan in the Guangdong province of southern China were plagued by a monstrous wild creature. Each Lunar New Year, it would wreak havoc in their paddy fields, completely destroying the next year's rice crop. The villagers called it Nian because, as it went about its deadly work, it uttered loud, terrifying cries that sounded like "nian, nian, nian".

One New Year's eve, the villagers took their courage in hand and fashioned a huge head from bamboo strips.  They pasted colored paper on it and, with small triangular pieces of colored cloth, fashioned a body that was long enough to hide two men. By raising and lowering the head and body, the men would imitate the Nian's movements, a sort of animated scarecrow. Just as the beast began to ravage the fields, this homemade creature leaped out of its hiding place and pranced about to the accompaniment of clashing pots and pans, drums and cymbals. The Nian, surprised and shocked to have his annual feast thus interrupted, took to his heels, never to be seen again. Thus was born the Lucky Lion. The villagers celebrated their victory every New Year's eve thereafter, and the custom spread to other villages in the province and beyond.

As the years passed and the art of lion dancing was passed from one generation to another, variations evolved, both in costume and ritual. The Lucky Lion was joined by the Smart Lion and the Fierce Lion. The Lucky Lion has a yellow face, white eyebrows and beard, and a purple horn; The Smart Lion sports a red face, black beard and eyebrows, yellow eyes, a green nose, and a purple horn; and the Fierce (or Fighting) Lion features a black, white,
and green head featuring black eyebrows and beard, red eyes, broken ears, a green nose, jutting teeth, an iron, horn, and many small bells on the black and white body.

A Test of Dexterity

The dances of the southern lion also grew out of the Foshan legend. Each New Year's eve, the villagers would place green leaves outside their doors or tie them on roof ledges to lure the lion, with the attendant good luck and prosperity. Dancers would inspect the greens, then ceremoniously gobble them up. Over the years, it became great sport to place all sorts of obstacles in the path of the lion as it sought to reach the greens. The fun in Plucking the Greens as it is called, comes from testing the dexterity, acrobatic skill, and imagination of the dancers. Thus almost all dancers are martial arts students. Nowadays, especially on New Year's eve, the "greens" often consist of cash donations from business establishments anxious to get their share of the lion's
good luck.

One of the most popular versions is the dangerous "snake", represented by a strip of sugar cane with two oranges for eyes, must be overcome in order to retrieve the greens -- a lettuce leaf placed on the "head" of the snake. To thunderous beats and rolls of highly decorated drums, the lion approaches cautiously. After a series of very careful inspections, it overpowers the snake when both dancers jumped onto the body of the snake and tear
out its eyes. There's much cheering when those two oranges disappear into the pockets of the dancers, and even more as they "swallow" the snake (the lead dancer passes the sugar cane through the lion's mouth to the tail dancer, who then chops it into pieces with his hand). Then, like a big, contented cat, the lion regurgitates a bit of what it had eaten -- that's when the good luck is returned.

Again like a cat, it washes itself after its meal scratching its mouth, mane, ears and body. Well groomed and well fed, it cranes its neck high in the air with a mighty upward thrust. Only then, to shouts of great merriment from onlookers, do the dancers take three well-deserved bows.